Is this Photo Offensive ?

Regular readers of my blog would be aware that I try and stay away from controversy whenever possible as people with mental health issues are often vulnerable and I endeavour to adhere to “Primum non nocere” (First, do no harm).

However, I recently received a message from Facebook stating that it had removed one of my posts on my personal page because it violated community standards and could be considered offensive. I do not know who reported it nor do I particularly care. Additionally, I am unsure as to when I posted it, but it would have been quite some time ago. I no doubt did post it, as I find contrast can be helpful at times to help cultivate gratitude when we feel life is hard. Despite me appealing, Facebook declined to overturn their original decision.

Here is the offending photo: 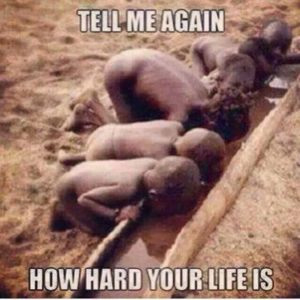 So is this photo offensive? I initially thought not but after some reflection I decided that maybe Facebook was right. Here is what I find offensive in relation to this photo. According to World Vision “Globally, 844 million people lack access to clean drinking water. Every day, over 800 children die from dirty water, due to diarrhoea caused by poor water, sanitation and hygiene and scarce or unreliable water and sanitation facilities in many communities around the world.” In 2018 “Worldwide, 2.1 billion people still live without safe drinking water in their homes and more than one billion people still have no choice but to defecate outside”. So well done Facebook for protecting us from offensive photos.

I did however find another photo I think is more offensive. Worldwide over 1,800 Billion dollars is spent on the military and yet we can’t find enough money to ensure everyone has access to clean water. 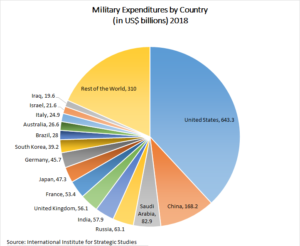 Hopefully Facebook will keep a look out for this offensive photo as well. Which photo do you find more offensive ?

I have written previously about how we are making progress in the acceptance of mental health issues titled  Not all heroes wear capes. Many organisations staff and high-profile individuals have made their own personal mental health struggles public. It appears that at least on the surface that attitudes are changing. One of the areas that changes in attitudes towards mental health is becoming more prominent is the workplace. Most workplaces now offer several days each year for personal or compassionate leave. Many workplaces train managers on the importance of a good mental health environment and the walls of the building and break rooms are often covered in posters about accessing help for a mental health crisis. Most companies have Employee Assistance Programs so employees can have access to free counselling for personal or mental health issues.

This all sounds good and is a giant leap from where we were maybe even 10 years ago. So what is the reality of disclosing that you need a “mental health” day off ? . Given all the changes that have occurred you might be thinking it is not a problem. However, many people still lie about their reasons for taking the day off. I have personally lied at times about having mental health issues as I knew there would be consequences. I know of many people whose work environment has suffered because of open disclosure. Ironically, some of the workplaces were not for profit charities whose primary focus was on mental health. It almost seems like it is okay to not be okay just don’t do it at work and don’t tell us about it.

Sarah Billington wrote a great article for Huffpost in 2018 titled “I Took A Mental Health Day At Work And Lied About It. Here’s Why.” In which she described the stigma that still exists in the workplace around mental health issues compared to physical illness. One paragraph that really sums up what a common attitude in the workplace is states, “An inability to do your job because you have a cough and a sore throat are viewed as an inability to work effectively in the short term. No one will even remember in a month. But excusing yourself from work for a day because you’re spiraling with anxiety and need to step back and get on top of it can affect an employer’s more long-term view of your abilities, even if taking that day means that you can get healthy again and be better than before.” (Billington 2018). That one paragraph sums up the attitude that still seems to exist today in many workplaces and in society in general. The author then concludes with “The stigma is real and undeserved. Mental illness doesn’t define me, and I’m stronger than people give me credit for. But until managers and employers start to treat mental illness as just as manageable in their employees as physiological illness, and not a weakness, I’ll lie, and so will so many others.”(Billington 2018). The article is an excellent read and gives a great insight into the reality of disclosing mental health issues in the workplace.

So where does that leave the individual who is suffering? I don’t wish to appear negative or to suggest that we don’t continue to make progress in how we view mental health issues in the workplace. It is always your decision on how to handle your mental health and your workplace. I just feel it is important to weigh up the pros and cons of disclosure. The goal is to get well and stay as well as possible, so figure out what will work best for you. Maybe you can see a counsellor privately and ring a helpline during lunch breaks to get through those really tough days. If you do choose to disclose your situation to your manager I hope you get all the support, you need. I just want you to go in with your eyes open. Not everyone at work is your friend and not everyone is going to understand.

Wishing you the best in your journey