The Health Benefits of Feeling Good

Why do breakups hurt so much?

Depending on your personal beliefs the idea that Life rewards action could also be stated as the Universe rewards action or God rewards action. Regardless of how you perceive the world it has been proven to me over and over again that action is the key. This is not only true of my own life but also of the many people I have known over the years. If you have ever felt stuck in a difficult life situation it can be confusing and overwhelming as to how to move forward. That is how to “take action”.

The action I am talking about is not just physical, it can be a mental or emotional action. Sometimes when we are feeling stuck we are so focused on the problem and how we think it can be fixed that we are not open to other possibilities. Taking action can be simply a change of attitude. An openness to all possibilities even if they don’t make sense at the time or you are worried that it won’t work. There are no guarantees in life and there are many paths to the same destination. However, one thing is true in every situation “A journey of a thousand miles begins with a single step”. When your back is against the wall the only thing you can do is move forward. Action is the key.

I clearly remember sitting in an A.A meeting and the speaker stated, when talking about depression, “ the only depression in your life is the one your backside has left on the seat you sit in all day long, get up and do something” . While those words may sound harsh, particularly as genuine depression is an illness, they also contained some wisdom. Do something? What do I do? The late Harry S Truman is quoted as saying “Imperfect action is better than perfect inaction.” Think about that statement for a while. Let it sink in and think about what action you could take today. Could you apply for that job even though you don’t meet all the selection criteria, could you ask that person out for coffee even though you think they may say no. It is all about momentum. If you have ever helped push a stalled or broken-down car you know that the most effort required is at the start. Once you get it moving it requires much less effort to keep it moving.

Finally let me add, I believe there are no absolutes in life. While writing this post I briefly switched to Facebook as I was waiting on a message from a friend. The following picture appeared in my news-feed. When things don’t go to plan just try and laugh and keep on trying. 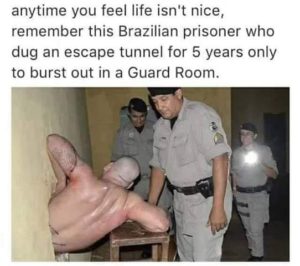 Clearly this man took action without the desired outcome. Still he did keep himself busy and got a good upper body workout 🙂